If you’re a fan of Orange Theory Fitness, you are familiar with the “orange zone,” and the “splat points” you aim to acquire within the zone. But for those wondering, “What is the Orange Theory workout,” or, “Why is it called Orange Theory,” here is a brief overview. At Orange Theory, you are first required to purchase one of their heart monitors, which will be used to portray your heart rate on a screen visible to all. The goal is to work at 84-91% of your max heart rate, a range they dub the “orange zone,” for 12-20 minutes of the workout. For each minute you are in the zone, you receive a “splat point” on the overhead screen. There are five zones: grey, blue, green, orange, and red, but it’s the orange that earns the points.

The goal is 12 splat points acquired per workout, and the class works together to achieve a total, which means everyone has to pull their weight. Half of the hour-long workout is done on a treadmill, and the other half involves indoor rowing and weight-bearing exercises. Orange Theory gyms base their methodology on the concept of high-intensity interval training, or HIIT, in that they boost your heart rate and move you through a series of different exercises. While it’s true in theory that HIIT is effective, Orange Theory’s execution is incorrect.

Their fan base is losing steam since Orange Theory is neither the best workout for weight loss, nor the best way to build muscle. The way they determine their orange zone is short-sighted and generalized, and the splat points are often discouraging and demeaning. The owners are aware of their flawed theory, and keep making ill-received changes. But to truly correct the problems, the company would need to change the only things that distinguish them.

The orange zone uses limited and generalized criteria like age to determine a target maximum heart rate. There are many flaws with this theory. Age doesn’t take into consideration fitness level, weight, health conditions, injuries, muscle mass, bone density, heart health, high blood pressure, medications, or stress. Orange Theory members are filing complaints ranging from lack of results, to illness or injury sustained by this improper measuring system. Some say that no matter what they do, they stay in the green zone, or red zone, and can’t seem to hit the target.

As a result, the owners are trying to fix their broken theory, with ideas like switching the heart rate algorithm to be based on the last 20 workouts, rather than age. But members are disappointed in the new system as well, since initial workouts don’t indicate current fitness levels, and efforts vary from day to day. Depending on calorie intake, sleep, hydration, caffeination, and stress, heart rates can vary widely even doing a similar workout. So, basing your workout on a heart monitor you have to buy is far less effective than seeking the guidance of professional coaches like Sweat440 employs.

Orange Theory implemented splat points, in theory, to motivate individuals. An overhead monitor displays your name, heart rate, and splat points for the class to see. There are some serious risks with this method. For many, it’s discouraging to let the class down by not hitting the points, particularly because some are at their max heart rate as defined by their doctor, but the orange zone calculated it incorrectly. It can lead to decreased attendance or quitting the gym altogether. Owners have begun adjusting the splat points to be easier to achieve, but that’s led to a feeling of inauthenticity, and less pride of accomplishment.

For others, it becomes an obsession, but one with limited rewards. Hitting that target heart rate will become easier each time, so it’s not a true measurement of progress. It’s also a risky plan to follow since it doesn’t take circumstances into account. If you’re recovering from illness or injury, didn’t get enough sleep, or aren’t adequately hydrated, pushing for splat points might not be conducive to overall health. For some, it’s a dangerous endeavor when they push too hard to please the class, without taking their body’s cues into account.

Orange Theory claims it provides a HIIT workout due to the combo of cardio and resistance training. But the first 30 minutes spent on the treadmill at Orange Theory don’t provide enough dynamics or variety to trigger the HIIT benefits. A trainer tells you when to increase intensity, but ultimately, it’s up to the individual to do so, and the timing is not customized to how each person is weathering their workout. Once you are off the treadmill, the floor work is often repetitive. Rowing machines and free weights comprise most of the classes, so you risk a plateau in progress as well as enthusiasm.

Compound cardio like Sweat440 provides keeps your body in frequent transition, so you don’t trigger muscle memory, or coast on an aerobic level rather than kicking into anaerobic gear for fat loss and muscle mass production. At Sweat440, each participant is closely monitored to make sure that the shift in energy expenditure is appropriate and has the desired impact. Rather than relying on a heart monitor, we rely on our expertise and your individual circumstances and abilities. Our 4 10-minute stations in 40 minutes pack everything into the most powerful bundle to make the maximum impact. 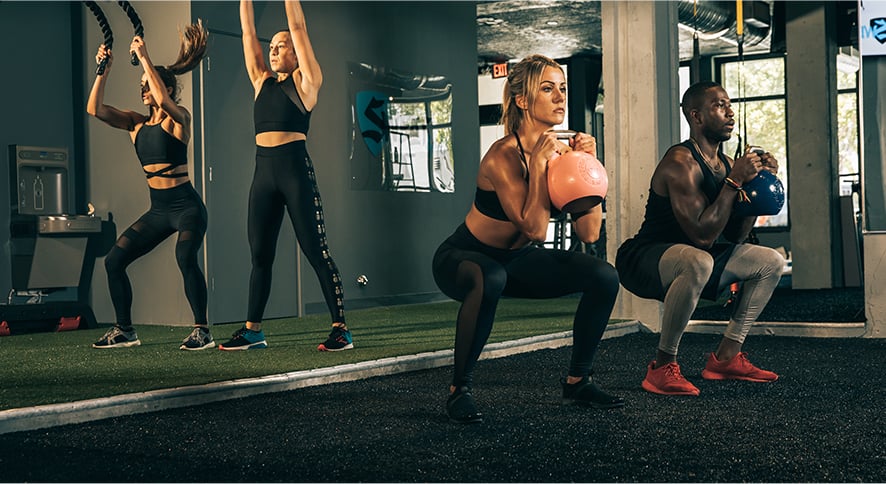 Your first class is FREE

Hiit classes near you